Among all the electric bike brands in America, Super73 is no doubt to be one of the most extraordinary. To those who are new to Super73, there is something you don’t know about them, and it will be revealed to you in this post, keep reading!

Like many others, Super73 started off its business by crowdfunding on Kickstarter. Here’s an interesting fact, back in 2016, when they put forward their campaign, the company was called Lithium Cycles, instead, Super73 was the bike model name that they were crowdfunding for!

What’s more, there were models they were trying to sell then, one of them was a 1000 watts mid-drive electric motorbike! Based on the picture we got, it looks like a BANFANG BBSHD motor.

The other one was with a hub motor, which I guess was the prototype of the Z series after some design modification.

Compared to the current model lines, it kind of looks like a combination of S and Z model, however, there are some major differences listed below:

The lithium battery placement was first under the saddle, which makes it a little bit invisible and makes the bike neat. Still, you can find the similar placement of the battery on the Z series models, but not exactly the same.

Super73 started by crowdfunding, and it was a brilliant idea. Just so you know, back in 2016, electric bikes are not commonly known by Americans, and the sales boom came later than that time. Why is that brilliant?

I am not sure when it started, celebrities are seen riding Super73 ebikes more and more often. Justin Bieber, Kwon Ji Yong, Will Smith, Madonna… They tweet, put clips on Instagram of their moments with Super73, imagine that, people. It was free and massive advertising! Naturally, their fans would wonder what is the weird look bike that they are riding and maybe give it a try.

Nike does co-branding, and guess what, Super73 does it too by RX Malibu!

For now, Super73 has 3 models lines that all have a distinguished style. When it comes to the price, from low to high, you’ll have Z series, S Series, R Series. 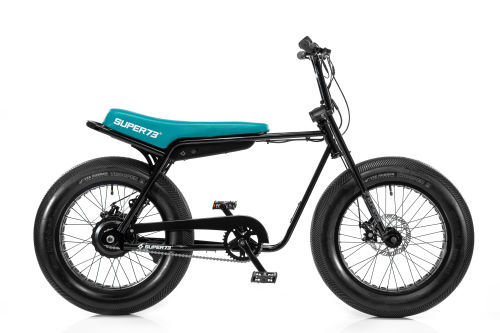 From the point of view of an electric bike factory, the specs and performance of Super73 models do not thrill me. During these days in 2022, 1000watts motor, big lithium batteries and etc are not enough to stand you out from the others. There are more competitors that can easily crush a Super73 bike on the road, even the R series, not to mention Z or S series, for example, a model from a brand(Name Starts with A)has dual motor and dual batteries, performance is simply not the thing of Super73 family. As an electric bike factory, even we can build an e-bike that overrun the Z or S models by specs and performance, but we can not beat the spirit behind them, to us, that’s what Super73 is about.

The charm of Super73 is its concept and unique design.

On their website, Super73 claims to be “an American lifestyle adventure brand based in Orange County, CA that develops products to help fuse motorcycle heritage with youth culture” How cool is that! A brand driven by such an idea will not stay an average joe. The number 73 is everywhere on their bikes, you can see it on the tires, on the tail end, on the battery, on the saddle, on the fork…it is everywhere.

Super73 is a unique American electric bike brand, the performance or specs are not the advantages to them, however, the spirit of courage and innovation behind the number 73 stands out.

Why do you choose Super73? Leave your comment below.

Last but not least

This will the first review of my American electric bike brand, more to come including Juiced bikes, Ariel Rider, Radpower and etc…

To clear, none of the brands that I review is a customer of ours, nor am I an affiliate of these brands, I’ll just keep as Neutral & Objective as I can.

As a Chinese, my English may be not decent or authentic enough, but I hope my perspective can fresh you up and my poor English will not ruin your time.

I am 100% sure you have read or seen reviews of Super73 or their e-bikes on the internet a million times, from an end-user, a Youtube blogger or those professional product reviewers… But this might be the first review you have read from an e-bike factory, a different angle.